What are digital isolators?

A digital isolator is a type of level shifter that utilizes magnetics to level shift communication buses between two devices that are on different power domains. These types of devices are pretty robust and can handle voltage differentials upwards of 1000V DC between the grounds of two devices. They can have uni or bidirectional channels that translate to the appropriate 1’s and 0’s that will meet the specifications of modern inter-processor communications, such as I2C at 400kHz and SPI at 10MHz. In this example I am using a Nucleus as the host and a GPIO expander as the device and will communicate between the two using I2C which requires bidirectional communication.

Why this actually matters

If you are not too familiar with electrical engineering you might be asking yourself what the point of this post is, and that is totally fair. The best example of why a digital isolator is actually useful is looking at a real world deployment of an electronic device. Say you build a device that needs to measure temperature and an end user is responsible for wiring that sensor up. In a perfect world the user would wire it to specification and everything would be just peachy. But in the off scenario where the user wires the temperature sensor up wrong and ends up applying voltages outside of your designated operating voltages, the chip used to measure said temperature would probably fail. Sometimes chips fail so hard that this user error can make its way back to the processor that is communicating with the chip and now the processor fails as well. But when utilizing an isolator, events that might cause a device to fail will not cause the host to fail. So even though temperatures cannot be read, the actual core of the device (the host) can still communicate and potentially give an alarm that it is unable to communicate with the temperature reading device. Utilizing isolators is just one small component in building robust devices that can handle a harsh real world environment.

The hardware is actually pretty simple to setup for this project. I included a fritzing breadboard diagram using the Raspberry Pi. I wasn’t able to find a part in fritzing for the MAX14850 but found a component that has the same number of pins so the pin numbers and locations will be the same. The Raspberry Pi supplies 5V to the right red rail while the Pi’s ground or right blue rail is connected to the +5V on the voltage supply on the left side red rail. The Raspberry Pi’s ground is tied to the voltage supply’s +5V rail which creates a 5V differential between the Pi and the MCP23017; note that I did this to demonstrate the devices on either side of the digital isolator do not have to share the same reference voltage. So in short, the Pi is running off 0V to 5V while the GPIO expander is running off -5V to 0V and they are connected through the digital isolator. The wire colors and voltages/pins are denoted below.

Also mad props to the guys at fritzing! I hadn’t used their software before this post but it is very simple to use and creates quite the visualization as opposed to taking pictures of a breadboard. 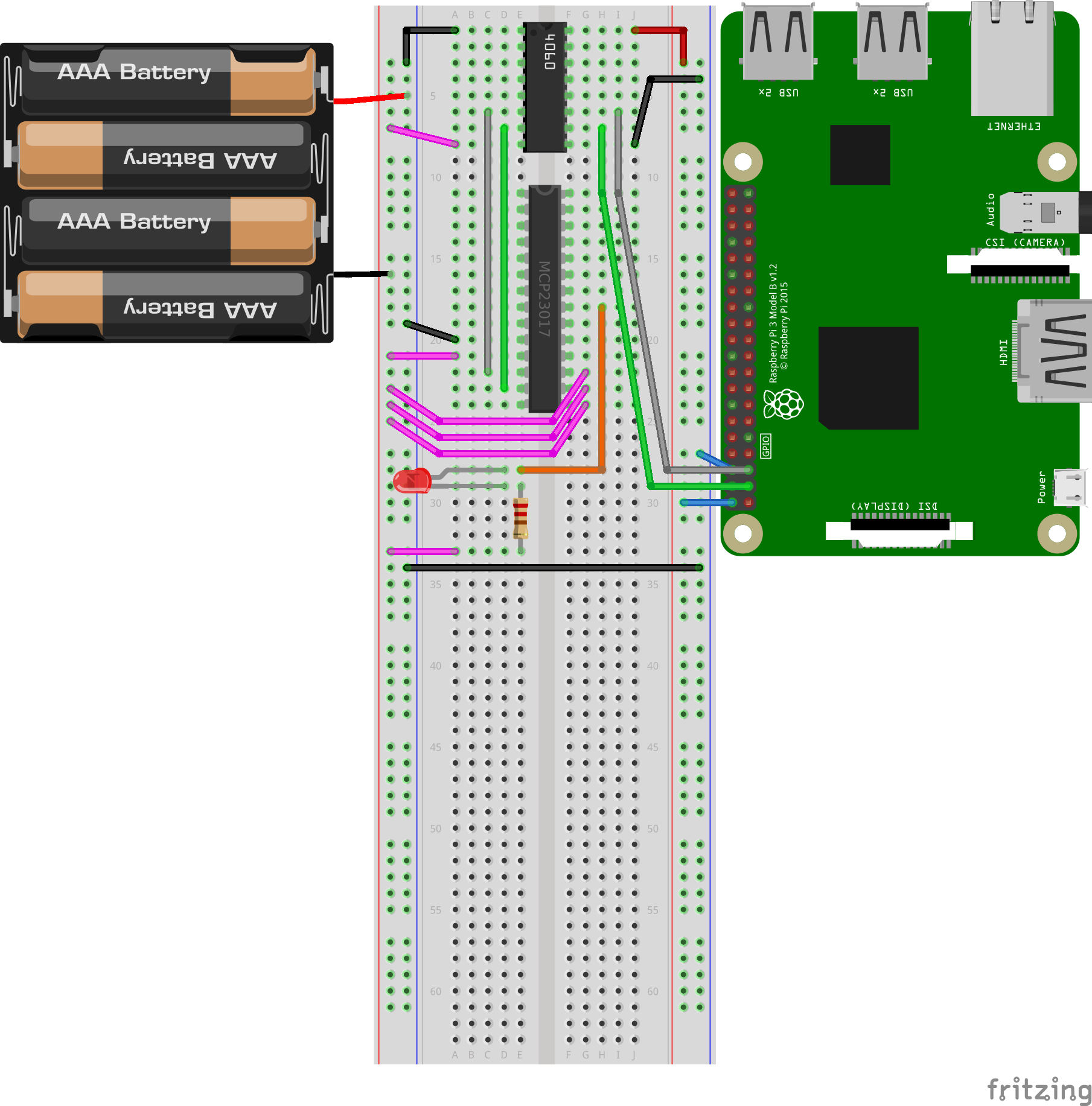 I wrote this in C because I’m pretty fluent in it currently and had just written some I2C code that I could use as a reference, but the same result could be conceived using C++, python, nodejs, arduino, go, or any language that has an I2C communication library.

The code is commented pretty well so I’ll just dive into the functionality.

Now for the most important part, can the digital isolator actually level shift? Well yes, yes it can! So the first capture is of the I2C clock signal before (yellow) and after (pink) the digital isolator. The clock is running at 400kHz and as you can see they match up pretty well. There is a deviation in the signal but the VIL and VIH (these are thresholds where an input is considered high, VIH, and low, VIL) are precise enough for both devices to recognize the signal. 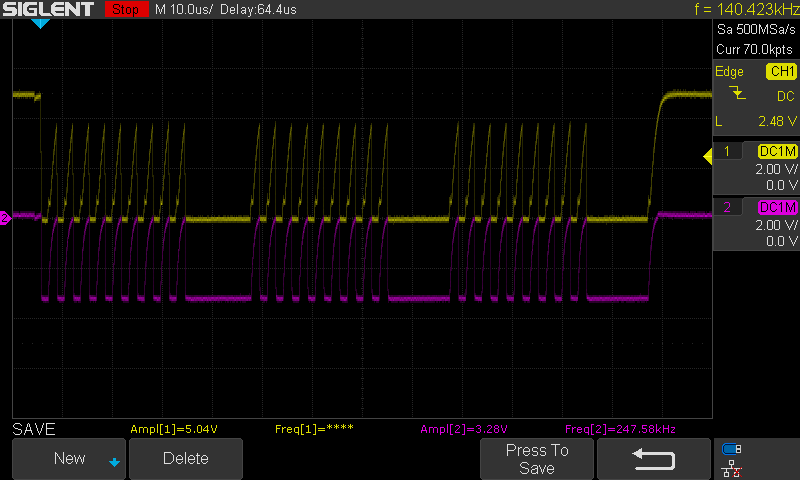 This second capture is of the I2C data signal and you can see that they also match up within specification because the host and device are communicating. Also full disclosure, I’m not sure what the small but short pulse is before the pin toggles on the host side is from and haven’t researched it, but communication is not affected because it is lower than the input low threshold voltage (VIL). 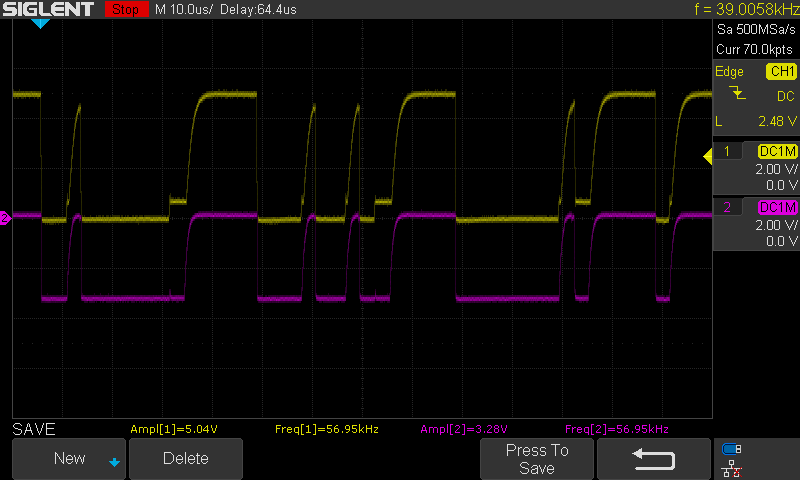 The third capture is one I2C transaction, specifically when writing to address 0x12 the value of 0x00; or writing a LOW to the output pin. You can see each bit in the communication and that it matches up to what the oscilloscope interpreted in its “decode” function. 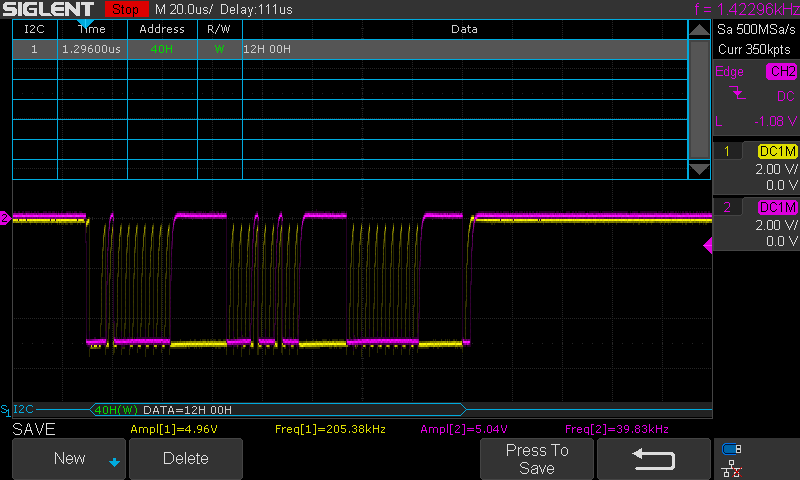 The last image is of the program above running without the 1 second sleeps. The config register is setting port GPIOA to 11111110 or all pins but 0 as inputs, and pin 0 as an output. Then the data in the decode shows a toggling of 1, 0, 1, 0, 1. So the digital isolator does work! 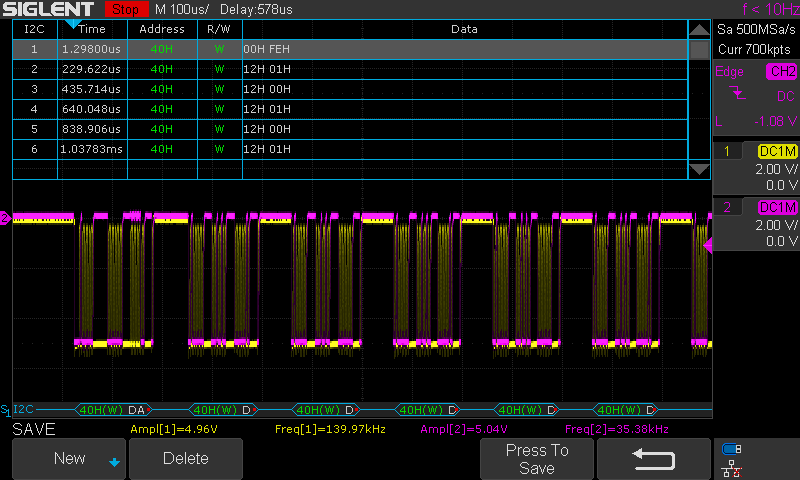 One last note on the oscilloscope captures, notice how on the left side the pink signal’s ground is directly in the middle of the screen vertically? Well the yellow signal is actually in the same location. So you can see that the GPIO chip is communicating with Nucleus when it’s reference voltage is 3.3V lower in the first two captures and 5V lower in the second two captures. Therefore the digital isolator actually accomplishes what it has advertised in its datasheet. Specifically for the MAX14850 this differential can be up to 850V DC while maintaining communication.

Well there you have it, digital isolators are level shifters that don’t care about crazy voltage differentials, they will translate voltage levels while maintaining adequate speed for inter-processor communication; all while keeping your precious CPU safe from any malicious voltages.